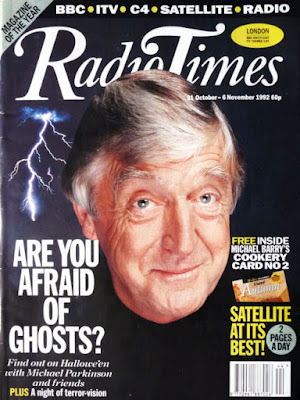 In October 1992, shortly before its first and only UK television broadcast, the Radio Times ran a cover story on Ghostwatch.

Curiously, rather than focus on the programme (perhaps by way of interviews with the cast/crew as one might expect with a cover story), the article, written by Sue Arnold, is more of a general overview of Hallowe'en itself, including some personal takes on witchcraft. Yet, an entire page alone is devoted to the iconic 'Bohemian Rhapsody' floating heads publicity still (a rare, alternate version of which can be seen below).

Here is an excerpt: "Some of my best friends are witches. Unlike me, they won't be glued to their television sets this Hallowe'en watching the potent brew of ghouls, ghosts and ghasties being served up to us on the spookiest night of the year. In BBC1's Screen One special, Ghostwatch, Michael Parkinson, Sarah Greene, Mike Smith and Craig Charles will be examining the paranormal and investigating the most haunted house in Britain. Brave souls can also descend into The Vault of Horror on BBC2, defying the night until dawn, where some of the scariest horror movies have been dusted off and resurrected." 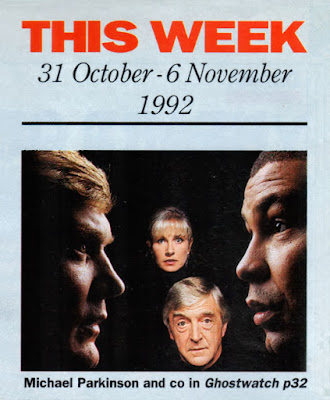 Do you remember seeing a copy in your local newsagents? Or perhaps, reading about the show in another publication? If so, drop us a line in the comments section below!

9.25pm Ghostwatch A Screen One Special drama for Hallowe'en written by Stephen Volk, starring Michael Parkinson, Sarah Green, Mike Smith, Craig Charles Ghosts no longer inhabit stately homes and rattle chains. They live in ordinary council houses like that of Mrs Pamela Early. For months she's suffered strange noises, awful smells and bent cutlery, but is hers really the most haunted house in Britain? BBCtv turns the cameras on ghoulies, ghosties and things that go bump in the night. 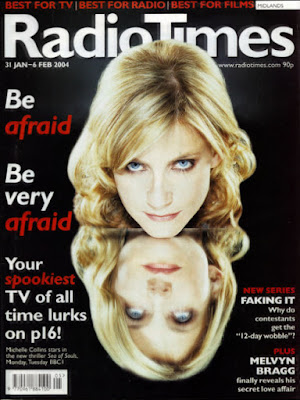 In the 31 Jan-6 Feb 2004 edition of the weekly magazine, Ghostwatch made a subsequent appearance as the third best spooky TV show ever, beaten only by The X Files and Stephen King's It.

An additional mention of the show can be found in the 30 Aug-5 Sept 2008 issue, as one of several "fireworks formula" hybrid TV concepts.