Showing posts from November, 2012
Show All

It could all be done with wires, for all we know... 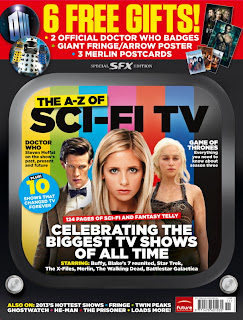 Greetings, Ghostwatchers! Before our big annual news update arrives later this month, we thought you might like to check out the latest special issue of SFX that just hit newsstands nationwide... On sale from the 27th of this month, the SFX A-Z of Sci-Fi TV comes complete with 6 free gifts (including badges, postcards and a poster) and a four-page cover article by Steve O'Brien on Ghostwatch . Not only that, but we hear there's also a very special mention for Behind the Curtains ... A full 124 pages of the best TV from past, present and future can be yours for only £7.99 in print form - with digital versions available too. For more info, click here to visit sfx.co.uk !
Post a Comment
Read more

Since yesterday, I must've said 'Thank-You', 'Cheers' or 'Ta' several dozen times (at least!) to everyone who joined in last night's festivities, so I promise, this is absolutely the very last time I'll say it again... THANK YOU!   In short, NS12 went astronomically well. We always have a great time, but BLIMEY - this year, the response was huge..! The comments were amazing. And the atmos was indefinably palpable. And thanks to the efforts and hard work from Twitter legends, @vixxxster @jamesgrime @farzey (and Indie Mae and Daniel Ford on Facebook) the stats are now available for all to see: 1,467 tweets 755,738 impressions 191,449 followers reached within the past 24 hours And not only that, but at one point, we were trending on the nationwide UK Twitter list - at least, sixth from the top with several hundred messages all coming through at once (though BtC supporter Daniel Ford has reported at one point,
2 comments
Read more
More posts