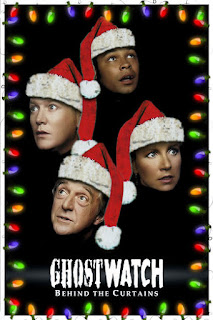 Season's Greetings, Ghostwatchers! Yes, another year has almost passed, and we are edging closer and closer to the 20th anniversary of Ghostwatch.

Who knows what next year might bring? Well, National Séance 2011, for one thing! What a great night, the last event turned out to be - thanks to everyone who participated, and roll on October!

Whilst we're still hard at work on the doc, we thought it might be fun to ask what questions YOU might put to the makers/stars of Ghostwatch? Try and think of at least one question for any of the cast/crew from the original film and leave them in the comments box below, in our forum, or on Facebook. The best entries might even be included in the final cut.

Do get writing, and we look forward to hearing from you!

And don't forget to check out the upcoming special live episode of Coronation Street on Thursday the 9th at 20:00 in honour of the show's 50th Anniversary. So far, during the soap's recent tram crash storyline, Craig Charles' character, cabbie Lloyd Mullaney, has been confronted with exploding doorways and collapsing viaducts - in fact, events on The Street have been so intense that Stephen Volk's wife Patricia was heard to remark how Craig surely hasn't had a more worrying time on screen since that fateful night he co-presented Ghostwatch(!) (...Well, not counting all those times he's dodged crazed Simulants, ravenous GELFs and Mutton Vindaloo Beasts on Red Dwarf, of course..!)

Be sure to visit Patricia's website @ www.patriciavolk.co.uk where you can check out her online art gallery and maybe even find a unique gift for someone this Xmas...

Oh, and for anyone who has wondered what phone-in caller Kevin Tripp looks like in the flesh ("Cheese and pickle sandwich, it was..!"), here's an interview featuring actor, Brendan O'Hea, discussing a recent production of Waiting for Godot.

As always, many thanks for your continued support, and we hope you all have a Merry Christmas and Happy New Year!