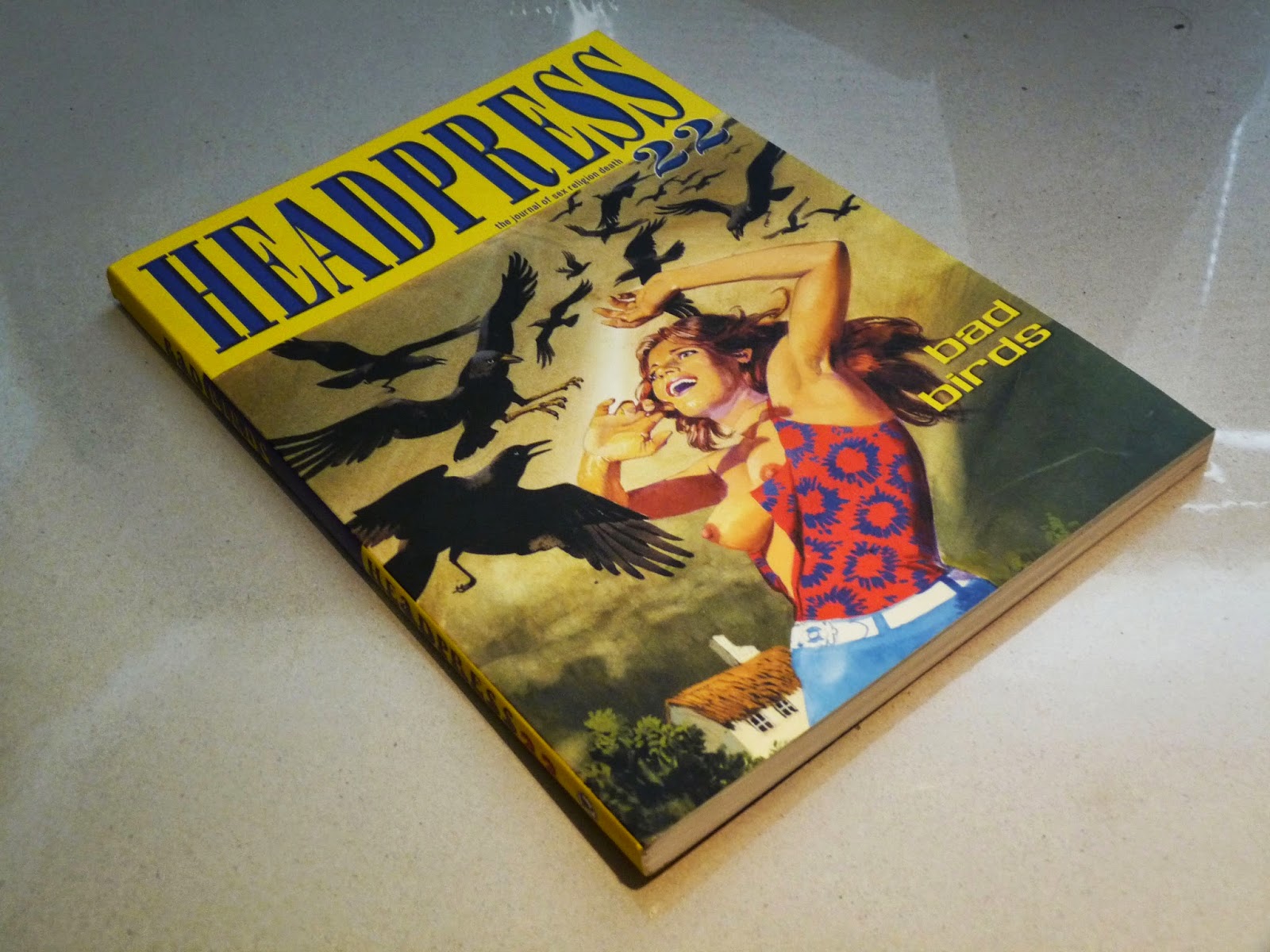 Been searching for a copy of this, for ages.

Headpress #22 is the twenty-second edition of Headpress. If that intro wasn't clear enough, according to its arresting cover, Headpress is a "journal of sex, religion [and] death" and this is typified in the striking image of a lovely lady being (seemingly) attacked by a flock of irate Hitchcockian crows. But who's to say they're on an attack course? Perhaps, they are merely intrigued by her distractingly-open shirt? It's all a bit Rorschach, if you ask me.

Released in 2001, this particular edition of the adult-themed bookazine(?) is a healthy 176 pages, fourteen of which are dedicated to an article entitled, 'Hunting Ghostwatch,' which commences on Page Thirteen. Written by Jerry Glover, the piece serves primarily as a highly detailed synopsis - I'm sure, very handy for readers who might have missed the film, and even more so when you consider the fantastic BFI DVD/VHS release was still a whole year away from hitting shelves.

The article also draws parallels between the show and other film productions. For instance, Kim Early is described as leading "another Blair Witch charge up to [her] bedroom," which genuinely made me think - of all the tropes we usually attribute between these two cinematic stories, staircases are in fact, very prominent in both. The noting of structural similarities with another fellow Horror classic is also highly intriguing, epitomised by the figurative question, "The pacing is brilliant. Seen The Exorcist lately? The most shocking thing about it now is how very little we actually get of the exorcism sequences."

Seven pages showcase what appears to be a clutch of VHS screengrabs, beautifully photo-edited to emphasise interlacing scan lines, harsh contrast, and skewed perspectives. It is arguably a testament to the production quality of Ghostwatch itself that even a handful of seemingly random low-res stills stand up so well on paper. Some even take on an art print vibe, and are very creepy to behold, indeed.

On Page 25, the age old figure of 20,000 calls to the switchboard is quoted, but I do not believe attributed, which seems more or less in line with our own research (the total number of switchboard calls has also been said to be upwards of 500,000). Another excellent point from Glover is that with the exception of fleeting appearances/commentary from behind the camera participants, Mike Aiton and Chris Miller, the only characters that appear on camera in the haunted house (not counting the fleeting appearance of Craig, who quickly scarpers before the drama has a chance to kick off, proper) are Sarah, Brid, Michelle and Cherise. All female. Does this thematically tie into the brief mention of Pam's divorce? Does Pipes 'himself' count as a male participant, or was Mother Seddons in fact pulling the strings? Answers on a postcard, as always.

Perhaps the most striking and certainly familiar passage to followers of Behind the Curtains, is the closing paragraph, partly quoted by Stephen Volk himself at the beginning of the doc:

"The underlying message of Ghostwatch is 'don't trust it just because television is telling you to - television is not reality,' which is about as subversive as TV can get. It's my guess that this is why Ghostwatch has been airbrushed from BBC history and why the BBC has not attempted anything quite so challenging since. Safer for all concerned if television is imagined as a window, not a mirror."

So, there you have it. Headpress 22. A fascinating read. Plus, it has Ghostwatch in it. And boobs. Win, win.