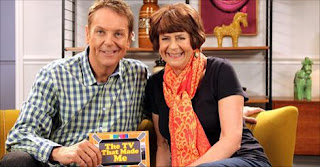 During Monday's edition of the BBC One nostalgia fest, The TV That Made Me, this week's guest, Pam Ayres shared her own personal appreciation of classic BBC Horror, Quatermass. Around that time, you might also have caught a small reference by host Brian Conley to our very own Ghostwatch being his "Favourite chiller!"

For a limited time, you can check out the episode in full on BBC iPlayer by clicking here. For the beginning of Pam's 'TV Fear' segment, which also features the public information film/nightmare generator, Protect and Survive, head to around the 13:40 mark. Brian's spooky showcase follows soon after, at around 20 mins in.

For the trivia-hungry among us, this marks the first time since October 2012 that Ghostwatch was last cap-doffed on TV (during CBBC's Twelve Again.) It's quite extraordinary that despite the fabled, full repeat screening still not showing any signs of happening anytime soon, the most recent partial broadcasts have all aired during daytime slots. Well, almost. But we're not going to mention the other show. Oh, no. Not since they knocked Tiffani Banister, too.

We asked @RealBrianConley if he was indeed a fellow Ghostwatcher, on Twitter. Our message was favourited, just a short while later. That made my day, that did. I mean, honestly, not even Septic Peg could have seen this one coming.