The as-live TV movie, Special Report: Journey to Mars is in simple terms, a hoot. Similar in tone to 1994's asteroid-phobic, Without Warning, the story follows an 'as-it-happens' broadcast of the so-called "Destiny" Mars landing, and its intrepid crew, who are merrily voyaging within what is occasionally described as being, "The most complicated machine ever built." A fairly risky-sounding proposition, if you ask me, as far as vital life support capsules are concerned. The simpler, the better, surely. Lest we not forget the sage wisdom of Montgomery Scott, "The more they overthink the plumbing, the easier it is to stop up the drain." 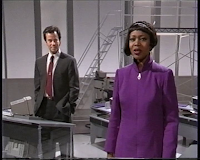 'Co-hosted' by perpetually-concerned optimist, Tamara O'Neal (Alfre Woodard) and stern-toned stalwart, Nick Van Pelt (Philip Casnoff) of globe-spanning news station, GNN, we are told that this once-in-a-lifetime event is being broadcast to a precisely-measured opening audience of 2,922,214,208 viewers – although, it is never explicitly stated how this figure has been deduced. Are these merely individual TV sets tuned in to the show, or social media trends, perhaps?

If that is the case, how would a group potentially watching in a pub somewhere be taken into account? Or an entire classroom, or a hospital ward tuned in? It was at this point that I found myself thinking back to just how improbable mass-Internet usage might have sounded around the time of broadcast (1996) and how the very notion must have seemed perfectly-suited for a light-hearted, Sci-Fi lark.

Ironically, it is arguably Special Report's imaginative depiction of Terran networking that has best withstood the test of time. Yet throughout, there's a "Mark my words – by the year 1980, everyone will have their own personal hovercraft" vibe that remains both as charming as it does distracting. Without mitigation, the delay-free link between Mars orbit and Earth stretches credulity somewhat, as does the CG model of the spacecraft never visibly rotating, despite centrifugal force being explicitly stated as a source of artificial gravity for our astronauts. It may sound pernickety, but target audiences tend to be clued-up on such technical matters, and simple errors or omissions can easily bounce viewers out of the presentation. A skein of political satire ties together a conspiracy subplot that threatens the security of the entire mission.

In the space of just under ninety-minutes, the thankfully level-headed crew are forced to contend with cancer-causing nanotech infections, debilitating malware affecting one of three crucial radars, a suspected saboteur, the cosmic reach of greedy corporate malfeasance, and even "ultra fascist" Europeans who for some reason appear to be proudly flying the flag of Bulgaria, which in this timeline (underhandedly) represents a radical splinter cell of the otherwise peaceful, "Native Earth Alliance" – a group of forward-thinking neo hippies, who for an environmental group, seem more clued-up in matters, fiscal than botanical. 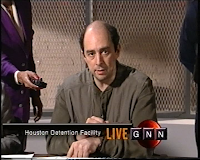 Khaki-swathed N.E.A. chairman, Eric Altman (the ever-wonderful, Richard Schiff), first interviewed from the edge of a minor but disproportionately-loud placard-protest, and later Houston Detention Facility(!), is staunchly opposed to the squandering of public money pooled from the twenty seven nation-strong 'Alliance' required to fly half a dozen people to a lifeless rock 183,401,807.74 miles away. With next to no counter-argument produced as to the mission's validity or purpose, you can't help but sympathise with the granola crowd's simplistic case.

As the slew of disparate villains merrily manipulate and coerce back home on Earth, you can imagine the eagerness of the Destiny crew at signing up, just to get the hell out of Dodge. At times, the privilege of being able to shout, "First!" on the ruby Martian soil almost feels like an afterthought than a game-changing historical privilege. Overall, the Destiny mission feels far too gooey and heartfelt a crusade than the scientific game-changer it rightfully ought to be. 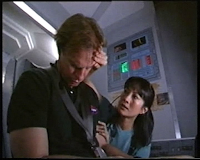 The crew are both typically diverse and conservatively unremarkable as once might expect. At heart, they're all Gosh Darn Heroic Sons of Guns™ – Astrotech Brit, Susan Lobel requires only four hours' sleep and likes fencing. Microbiologist, Lin Yo Yu's husband ironically refuses to fly. Russian pilot, Tanya Sadavoy once dreamed of meeting Neil Armstrong on the moon, which from one of the veritably-propagandic mission profiles peppered throughout the show, seems to have been enough to land her the gig, alone.

When the posse gathers in the med-bay, and their injured commander asks for two volunteers for a dangerous space walk, everyone's hands go up. The faultless heroism and teamwork on display is enough to make you Rimmer Salute in respect.

The only crew-member on-board who deviates from the norm is Captain Eugene T. Slader (played by Keith Carradine). Progressively unable to think straight, his erratic orders and disorganised commands stem from an unforeseen physical ailment, which is set in motion practically from the get-go. This is initially manifested in repeated, painful arm-clutching, before his eventual relief from duty (which surely would/should have happened on medical grounds as soon as his obvious and undeniable symptoms began to show.) Nevertheless, Carradine progressively brings a notably tragic confusion to a once charismatic lead character. 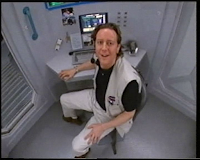 Also on-board, doe-eyed, fish out of water, GNN Science Correspondent, Ryan West (Judge 'Freaking' Reinhold) is the only (visible) alien in the entire piece. Pleasantly buzzing from crewman to crewman, needlessly distracting them from their crucial work, he updates the studio (in real time, no less) courtesy of a wired comms device which is far too bulky and expensive-looking a prop not to be of crucial importance, later on. For better or worse, West must by far be one of the most relentlessly upbeat and clean-cut characters I have ever seen in any medium. His cheery grin and humming voice could both buff and cut through steel simultaneously. And that hair. Seriously. What a guy. 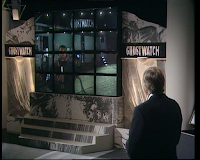 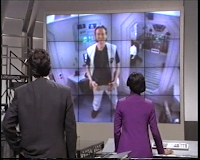 As a prime example of reality-bending cinéma vérité, Special Report is a curious but worthy addition to the pantheon. Despite very much being an U.S. production, connections to other works (including Ghostwatch) are more plentiful than they might first appear.

For a start, the 'live' studio location has its very own sixteen-screen video wall, which connects the two hosts to special guests/talking heads (curiously, Without Warning also has a similar setup, though slightly smaller, comprising nine screens.) There are several (albeit simulated) video glitches, including one fairly disturbing moment early on, in which the live feed is 'hacked' by a balaclava'd techno terrorist who threatens to fatally derail the daring space mission if his demands are not met – itself, evoking daymares of the Doctor Who/Max Headroom pirating incident of 1987.

As with the equally-watchable Without Warning, for a reality-based narrative, the dialogue is at times, well, florid to say the least. Though, in all fairness, it can be an incredibly tight rope to traverse in constructing natural speech that also advances the plot – hence, one of Blair Witch's strengths being particularly strong improvisation.

And then, there's the ending. Which I actually still find to be genuinely unnerving. I don't know what it is about these Reality Horror moments that even now continues to chill me to the core. Perhaps it's a kind of Uncanny Valley effect – when something gets so close to (at least, feeling) real, that alarm bells start ringing in the backs of our heads. It's as good a theory as any other, I suppose. (spoilers follow...) 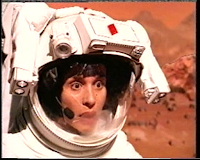 After saving the day and landing safely (as she humbly proclaims, "Right on the button!") Sadavoy steps out onto the sandy surface of our nearest planetary neighbour... and sees something. Then, the image cuts to static, leaving us all in unsettling limbo. It's an unexpectedly stark moment that evokes one of the final shots of Alternative Three. And the eerie silence that follows, coupled by the discordant tones of X-Files composer, Mark Snow's closing theme does a remarkably effective job of intertwining the profound loneliness and isolation of our potentially lost crew.

Granted, to the trained eye, Special Report may not adhere strictly to the form it is drawing from, but Drama does have a habit of taking many different routes in order to achieve its ends. Yes, the film might have dated here and there, but that's not necessarily a bad thing. I actually found it quite fascinating to revisit (having caught it many years previous on Sky Movies,) and tick off the once-fanciful notions that have since become commonplace. However, those going into this hoping to catch a more accurate type of space romp may come away feeling just slightly frustrated.

It's so easy to retroactively amend a film, but in hindsight, I wonder if it might have been interesting to follow the adventure with a more accurate time-delay – particularly, if thanks to some sleuthing, the studio presenters suddenly became aware that something was about to happen to the crew, and had no choice but to watch them tumble into oblivion via the cool eye of the impartial video-link... A kind-of cross between Apollo 13 and The Two Ronnies' Mastermind sketch, you might say. Actually, scratch that. Doesn't sound scary, at all.

In any event, Ghostwatchers, do try and check this one out if you can. Special Report: Journey to Mars is barely available on VHS from all good unusual outlets.