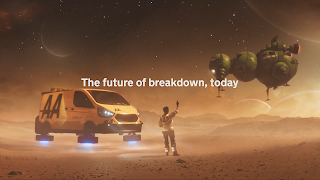 Unscrew your Blue Alert bulbs, and get ready to replace them with some red-tinted push-fits, as you guessed it, I'm about to talk about Red Dwarf, again.

By now, you no doubt must have realised that I'm a fan. Watching the show is one of my earliest memories, and following the series in the nineties ranks among the most enjoyable past times of my entire life, not counting of course, angling, golf, and the all-time number one. I worked on-and-off for the production company for a number of years, I've sat down for a biryani with one of its creators (after pretending to be a vicar for them), I've currently one of the most comprehensive sets of official trading cards in the world (no, really), and not long back, I redesigned the official magazine Back To Reality, for which I even wroted my first and only fan fiction, exploring a long-mooted suggestion of the cast's to bring back guest actor extraordinaire, Clayton Mark as Elvis.

I like the show. I dig it. It's funny. Why does it work so well? I'm just about considering attempting to gather my thoughts, for a book on the subject, someday. Plus, Craig's in it, which as it happens, I also seem to recall uttering, around 21:30 on Hallowe'en Night, 1992.

Over the years, as with all things, Red Dwarf has changed. You might even say, 'evolved'. My era is very much Series I-VI, though so-called New Dwarf has its moments to be found, too. Around the time Series XI was in production, myself, the doc's Digital FX artist Danny Stephenson, and mutual chum Jez Harrison contributed some motion graphics to the show; notably, two recreations of Starbug's laser-scan readout display, that often adorned the redressed cockpit set.

Earlier today, fellow dear old friends Ganymede & Titan, broke the news that a brand-new outing from the Boyz had dropped not only on YouTube, but also TV sets across the land, as "Stellar Rescue" appropriately crashed through the omnizone, and into existence.

The advert (which you've probably just seen) for British breakdown service, AA, is one minute long, and features four of the show's main characters (not Holly, or Kochanski) in Starbug's radically-revised cockpit, helplessly stranded on a barren, lightning-struck planetoid, waiting patiently for Drive Smart recovery. The miniature/model utilitsed appears to be the most-recently modified version of the usually-unmistakable craft, which given its intermittently frosty fan reception, a while back, could surely have saved itself a whole heap of trouble by simply using any number other than, "1" on its tail fins, to aid in differentiating from past models, continuity-wise. 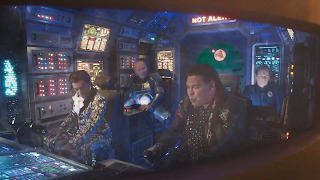 Nevertheless, following a truly breath-taking exterior shot of the bulbous ship-to-surface vessel, with its tripropellant ion engines once again predictably failing to turn-over, we push in to the other side of the otherwise cramped cockpit, care of an almost-imperceptible, through-the-windscreen transition, which is just delightful.

When Cat starts to panic during the increasing lightning storm, Rimmer whips out a brand-new phone prop - somewhat reminiscent of the repurposed Binatone Trend 2 model from Series X's, Trojan. Beside him is the also new, Haynes Manual-like, "Space Rescue Service - Breakdown Policy" binder, similar to the 5517/13 Alpha Sim Modem poster we also happened to create for one of the Dimension Jump fan conferences, a while back.

In a rare act of selflessness, Rimmer takes it upon himself to call the helpline, and for the remaining 40 seconds or so, somewhat less uncommonly proceeds to let his neuroses get the better of him, as he fails miserably in even selecting the automated line's, 'Option One'; possibly due to not having listened to simply just, 'Press, One' on its keypad, instead. 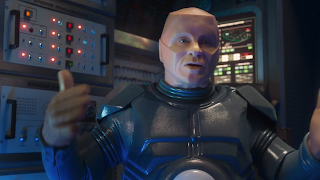 Strange to mention, but Kryten's now-iconic appearance has gone through some trials & tribulations, of late. Least of all care of some unsympathetic design choices, but also in terms of application. One recent audience screening that I attended, unforgettably saw actor, Llewellyn wearing his own spectacles over the foam mask apparently due to some, unseen technical difficulties.

Here, old 2X4B-523P looks very nice indeed, with Bobby's one and only line, as perfectly delivered, as it was pitched on the page.

Understandably dubious as to the mere notion that the AA could not only traverse time & space, but somehow also bypass the near-total extinction of the entire human race three million years into the future, the crew is thunderstruck when Lister presents his smartphone (that until now, we've never seen him use once before), which is currently tracking a DeLorean-esque recovery van, now coming in, for a close landing. 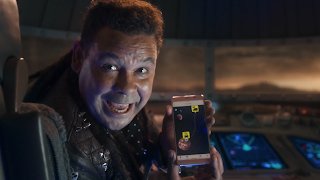 On boarding the ship, the breakdown mechanic enters into the cockpit, and proceeds to repair the vessel, apparently from one of the fore navigational panels; which to any real, alive & solid fan that is worth their salt, would know is actually impossible, as that is where the lateral bypass NaviComp guidance array is housed, not the baseband omni-transceiver control circuits. Guh, I mean, don't these people, like, know anything about Red Dwarf, and stuff?!

With Starbug soon back to full, working order, Cat decides to effect a welcome call-back to classic Series III episode, Backwards, and rudely eject the hologrammic Rimmer from his station, before hitting the retros, and blasting off from the sandy surface. But... does this mean that AJ is now stranded on the moon, and actor Barrie has temporarily left the series, yet again? Also, how did Rimmer's light-bee cope with the intense electomagnetic radiation of the highly-charged ion storm, as specifically, and explicitly presented herein? As a fan, I feel that I need... no, actually demand answers, to these clear lapses in advert-to-series continuity. Your Magnificence.

Overall, the commercial proved a very welcome and enjoyable surprise. Not only well and tightly-written, the performances are near-enough perfect, and the visual effects are boffo, to say the least. Chris Barrie's inexplicable utterance of the word, "Uno" is surely Hall-Of-Fame-worthy in its devilishly-delectable delivery. It's also nice to hear some classic, early series Goodall, twixt cover version, Hendrix-mix, to close. 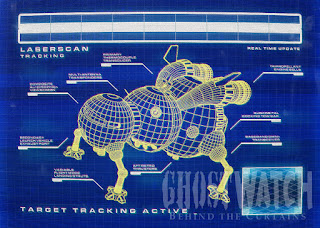 The cinematography and lighting also seems greatly improved from recent episodes, with carefully-considered close-ups, and narrative-driven editing choices throughout. It's all very cinematic.

Sadly, between 2016 and now, us Three Musky Tears' set-mounted, wire-frame graphic appears to have... fell off, so here's a sneak peek at the original concept art, complete with a few technobuggle annotations. I always enjoyed, "Suborbital Docking Tow Bar".

I have to admit, my single biggest regret, other than not having personally contributed to this otherwise inspired trail, is its run-time. At only sixty-seconds on the dot, it doesn't come close to the 5,400 seconds required to expand it, into a feature. With rumours of the show's thirteenth series, slowly gathering a head of steam, as we speak, all I can say is... stranger things have happened. Usually, following a chicken vindaloo and beer milkshake.