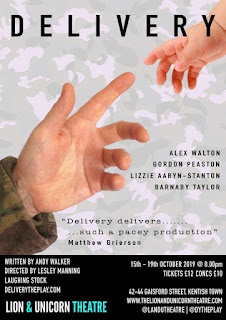 Exciting news, with the recent announcement that director, Lesley Manning is helming the new theatrical production, DELIVERY, which shall be playing at The Lion & Unicorn Theatre from 15th – 19th October, 8:00pm.

A production packed with emotion, laughs, and subtlety, selected from hundreds of applicants, DELIVERY is described as, "A journey that travels a road lined with humour, humanity and hope. A life-affirming comedy-drama featuring depressed fruit flies, an amorous slug, and existential sheep." Considering the following, very moving synopsis alone, you can appreciate why it received such a rapturous response from a full house at the OSO Barnes, in July. 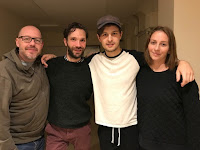 The future should look bright for Joe. He loves his wife Angela, and they’re expecting their first baby. However, as he awaits the delivery, Joe’s deeply troubled character emerges. Can a severely damaged paratrooper ever become a loving dad? No one realises how deep the gutter is until they have to climb out of it.

Given the unmissable involvement of Lesley Manning, in her reliably recognisable role of director, I don't think that much in the way of encouragement is particularly required here, certainly for us Ghostwatchers, in checking this one out, if you can. Tickets are £12/Concessions £10, available from thelionandunicorntheatre.com

And until next time, Ghostwatchers... try not to have sleepless nights.