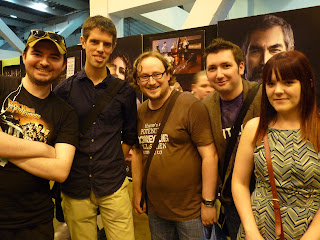 It’s around 18:00, on 2nd August 2020 when my phone finally recovers its much-needed signal-strength to receive data. As those blocky antenna pixels unconsciously stack-up, the few bytes that have been waiting to download, sent by an old, mutual friend some 99 minutes earlier, almost entirely sap my own.

Within moments, I realise this digitised message concerns the increasingly-inevitable news that one always hopes shall arrive much later down the road, but once more, has filtered down far too soon — another mate has passed away.

Let me begin by saying that as a friend of the late, Seb Patrick‘s, I can assuredly say that he was a student of all sciences. To name but a few eclectic categories of note, his love of comic books, contemporary media, and a variety of sports cultured a veritably encyclopaedic knowledge that those in his inner & outer circles could always reliably draw upon for a solid opinion. In simple terms, he was a dedicated family man, with an ever-growing number of incredibly close friends, colleagues, and followers. For those reasons, and many more, he shall be sorely missed.

I first met Seb, as is now commonplace, via The Internet. Well over a decade ago by now, online forum and discussion hub, Ganymede & Titan had kindly hoisted me onto their shoulders to showcase some Red Dwarf-inspired fan art and video editing I had been experimenting with; that arguably helped me land a brief, but honoured gig at Grant Naylor Productions.

It was a real pleasure to be invited into that ouroboros-esque posse of like-minded friends; for whom even the least like-minded among us (... ahem) seemed nonetheless bound by the simple, common thread of enjoying a curious BBC sitcom that from the get-go, and for whatever reason[s], seemed light-years ahead of its contemporaries; both in terms of overall production value, and its rare ability to proffer genuine heart & meaning alongside otherwise thrilling, fantastical stories.

I will never forget those occasions where Seb and I crossed paths, professionally. We were Smeggheads together, at one of the Dimension Jump conventions in Birmingham; in other words, hand-picked Dwarfer Nerds deemed most-likely able to answer questions for the spoof BBC quiz of the almost-same name...

Despite getting all my questions right [though, I’ll never forget the brief, cold sweat on being asked in front of the large, gathered crowd, “In which year did Rimmer’s favourite fascist dictator lose the Battle of Waterloo?”) for a further few unnerving moments, our team’s final question well-and-truly stumped, even us. It involved recalling the contents of a particularly long-numbered yet otherwise unremarkable space canister. After a few moments of contemplation, Seb assertively spoke into his microphone, “Kochanski’s remains”, and we took home the figurative trophy, to a genuine round of applause.

We also had the pleasure of interviewing Seb at Earl’s Court for, Behind the Table — the short follow-up to, Behind the Curtains. I’ll allow his wise words to speak for themselves...

And, speaking of the doc. When Seb took on the full-time role of Editor for reddwarf.co.uk, in his infinite wisdom, he somehow managed to announce the news that my life-long dream project had finally come to pass [well, DVD], on my birthday, no less.

Shortly thereafter, also backstage at a DJ event — upon examining in person, the theatrical release poster for the doc, I vividly recall his expression lifting on noticing slight recurrent artistic touches in my work. I can’t recall his exact words, but I can still see his wonder-filled eyes, and excited smile, as he keenly pointed them out to myself and those present.

Thanks, Seb. In the small space of just 37 years, you leave behind a formidable professional legacy, an equally-impressive wealth of dedicated work, and good memories to be poured over, for longer than I can foretell. Your closest friends and family are currently exchanging those unforgettable stories, and genuine moments, which shall continue to be shared for many years to come, I'm sure.

My heart and very best wishes goes out to Seb's wife, and daughter, during this incredibly difficult time.

See you, Smeg-head. I had come to regard you, as far more than someone I had merely met. As far as I was concerned, you were family. Hit the retros.