I tell you what, why don't we put it up somewhere, where everyone can see it? 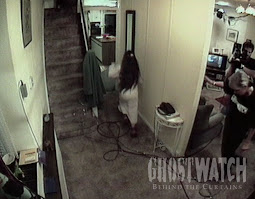 Well, another fact has become a news. By now, we all know, the longer you wait around these here Foxhillian parts, invariably, yet another post-obvious hidden gem shall rear its head, compelling us all to ask why we didn't happen to notice it earlier.

On the 11th of September 2020, Twitter user @MailerJon reached out to share something that certainly hadn't registered with me, even after the best part of 28 years of loyal Ghostwatching.

At approximately nineteen minutes, forty-eight seconds into old favourite, Spook Watch with Michael Aspel, the live feed cuts to one of the wall-mounted mini-cams – specifically, the hallway shot, as seen above. For context, Kimmy has just gifted Sarah Greene with her personal sketch of Raymond Tunstall/Mother Seddons, and decided the best place for it to go up, is on the fridge-freezer in the kitchen – the coldest part of the house.

What Jon has astutely noted, is that during that locked-off shot, in which Sarah and her intrepid crew ventures from the living room to the hallway, just barely visible in the background, is the Earlys' living room TV set. Later on in the programme, we see this device's source image change on no less that two separate occasions; first, when Pam shows Sarah some VHS footage of her family's stilted appearance on what is generally considered as, "Kil-roy Lite", and second, when Suzie is about to start playing Dizzy [Egg] on her trusty Commodore CBM-610.

What is most interesting about this particular observation is its place in the canon or verisimilitude of the Ghostwatch story. In meta-fictional terms, if we the audience are seeing the 'live' BBC1 feed from that wall-mounted cam, then one would assume the image on the Earlys' TV set would likely be the same; resulting in a recursive, Droste-like Effect, in which the apparent footage would be seen within the TV screen, itself – with that replicated also, and so on, and so forth.

But, no. Evidently, the action as presented on the television appears to be the actual live feed from roving cameraman, Chris Miller's shoulder cam; which conclusively demonstrates that the television in the Early House is receiving a different signal to that which 'we' are.

So, in the words of a truly great store detective, why is this thus? What is the reason for this thus-ness? I will tell you, it is thus. Thus it has always been, and ever thus should have ever been thus.

In other words, excitingly, there may not be a clear-cut answer, to this one... Least of all, as Jon also believes there may be a sneaky Pipes Sighting hidden somewhere within the television footage. Can't see anything there, myself... False alarm? Famous last words, I know, but do let us know if you can catch this elusive glimpse, yourself.

As for suitable explanations, Pipes is a master manipulator; particularly but not exclusively of technology. It is feasible, even at this early stage of Pascoe's unwitting 'massive seance', that the Ghost is somehow determining what the house's occupants are seeing. The singular, most crucial aspect to bear in mind with this theory however, is 'Why?' What is Pipes gaining by switching from a locked-off shot, to a mobile one? Aside from [also in the words of Jon] possibly 'tracking' these visitors now exploring his domicile; having potentially usurped the eye of the camera, for his own.

The second, and arguably more plausible theory is that the notional BBC crew responsible for tooling-up the Ghostwatch broadcast has set-up a custom feed to the Earlys' TV set, for the family to uniquely and directly benefit from, themselves. The singular, most crucial aspect to bear in mind with this theory, however is, what does the Early Family gain by having a live feed of Chris Miller's camera feed, rather than simply what everyone else is seeing in their living rooms, or elsewhere?

And, it is precisely this which leads to the second theorem holding even more weight. Droste Effect aside, let alone any on-set technicans no doubt wanting to prevent similar audio-based issues, could the [again, notional] director of Ghostwatch have considered giving the Early Family a unique insight into their own home, at some point during the proceedings? Might there have been a sequence envisioned, and later abandoned for obvious reasons, featuring the terrorised trio monitoring Sarah & Company independently exploring their property, first-hand? Who can say what the remainder of the otherwise-itinerised evening may have entailed, before the proverbial ectoplasm hit the fan... 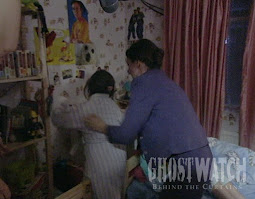 But that's not all, as Jon has also broached what appears to be a mini poster of famed "science-educator", Carl Sagan, proudly-displayed on the sisters' bedroom wall [upper-centre, here]. A mite incongruous a choice you may agree, especially alongside depictions of then-magazine-stalwarts, Jason Donovan, and MC Hammer. Could this be a suitably-sceptical Easter Egg, dropped-in by the crew? Or, were Kimmy & Suzie just budding astrophysicists?

In any event, what a fun pair of finds! With thanks again to Jon for getting in touch, on the above.

And, as always, until next time... try not to have sleepless nights. Hope you're all doing well, everyone. x