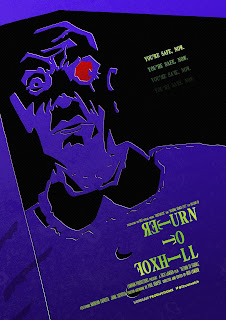 I hope that you're all staying safe, having great fun already, and enjoying this wonderfully unique time of year.

Surely, the second most wonderful annual event [if you're a Ghostwatcher]. I'm not sure if it's these authentic [circa 1992] Golden Wonder crisps I'm digging into, but I've recently started catching tiny glimpses of familiar faces who seem to be priming themselves to make one or two dimly-lit appearances on Twitter and Facebook in the run-up to the event. Can you identify them all..? Probably.

In honour of the 29th Anniversary of Ghostwatch, on Hallowe'en, a brand-new mini-documentary shall go live on YouTube, entitled, Return to Foxhill. It's something that I very much hoped to include in Behind the Curtains itself, and sincerely hope you enjoy checking it out, at long last. I'm very proud of the piece, and had a blast making it. Please find attached the announcement poster, featuring some rather spiffing, and not to mention chilling central artwork as kindly expunged from the darkest synaptic recesses of artist and friend of the project, Paul Draper.

Behind the scenes here at Behind the Curtains, and very much in response to your comments still coming-in, considerable efforts have been made to help bring the documentary back in some form. Whilst nothing is set in stone, 2022 [the Thirtieth Anniversary for the drama] is currently looking promising, for one reason or another. I cannot be more specific at the moment, but as you probably know, I've been doing my utmost to make this happen since the last DVD copy was eBayed, in 2018. Whatever happens, I cannot express just how grateful I am for your continued good wishes.

So, for anybody not in the know, us Ghostwatchers like to watch our favourite Hallowe'en Hoax each and every year to simulate the fabled repeat screening that has still yet to materialise. We call this evening, National Séance, and this year marks the 11th event.

... What is materialising on Hallowe'en Night this year, however, is a live Hallowe'en 'special' episode of Mrs Brown's Boys. Now, other than thoroughly expecting the evening to be genuinely enjoyed by the show's fans, cast & crew, it is important to note that, given the nature of this recent announcement, this is essentially how the BBC is following-up Ghostwatch, three decades-on.

If discounting BBC Two's Inside No. 9 special [for little more than airing three days short, on the 28th October 2018], I cannot recall the broadcaster openly developing a 'live', dramatic, Hallowe'en Night special for their flagship channel since 1992... Actually, let's take a look.

Care of Genome, BBC1 [and/or BBC One London] transmitted the following programmes on subsequent Hallowe'en Nights post-1992, during the Ghostwatch time-slot, between 1993-2009:

With that carefully-inputted data (... ooh) we can see four dramas, one current affairs, two sports, two sci-fi, five docos, and three comedies during the next seventeen years (at which point, the wellspring of Genome info runs dry).

So, in going the comedic route to celebrate the sacred, centuries-old, overly-commercialised, annual tradition otherwise known as All Hallow's Eve, I cannot help but feel this marks a rather safe choice when you consider the innumerable opportunities otherwise available to develop something... well, even scarier than that detailed above. But actual, funny, amusing, real joking aside, there's every chance that O'Carroll and Co. may successfully pull one of Tunstall's cats out of the bag. Trouble is, it's likely to clash with #NS21, so catch-up is looking to be the most likely option here at GW Central.

In a roundabout way, this news barely stokes the ever-smouldering embers of hope that Ghostwatch itself may someday be afforded the recognition in broadcasting it sorely deserves. Last month, the entirely-engrossing Parkinson at 50 documentary aired on BBC One. In 2020, Mark Kermode's exemplary-Exorcist-exploration, The Fear of God, rightly landed on BBC iPlayer [and it is reported, soon-to-be BBC Four, also]. Surely, there's ninety-minutes spare for our film, too, somewhere?

In all fairness, I cannot imagine why this cannot happen given that Behind the Curtains did feature and, crucially, rank well on BBC Store. Both productions' persistent absence from the aforementioned listings pages of the Radio Times remain something of a mystery, so if you'd like them to return, do get tapping on your keyboards [be they spongy grey rubber, clickity-clackety polycarbonate, or newfangled capacitive silicate], and keep registering your keen interest with those who have the power to make things happen. As always, any/all help in getting the word out will be greatly appreciated.

Looking forward to seeing you on the 31st, Pipes Phobes. Remember, start your copies at 21:25 sharp, share your thoughts, creations, photographs, and/or infra-red interfaces, and let's get that all-important hashtag, #Ghostwatch up on that leaderboard, where it so enjoys [even briefly] residing!

Until then... do try not to have sleepless nights.