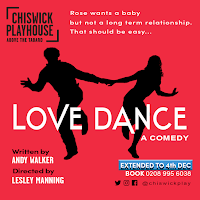 If you're on the search for a fresh and enlightening theatre production in the Chiswick area during these reliably-dreary November and December months, then look no further - as Ghostwatch director, Lesley Manning is currently helming an exciting new production at the Playhouse entitled, Love Dance. And what's more, it's already earning rave reviews.

Written by Andy Walker, its story goes a little something like this...

LOVE DANCE is a heart-warming romantic comedy driven by two mismatched characters. Rose is a high-flying surgeon, with a determined take-no-prisoners approach to life. She’s carved out a successful career for herself based on innate ability driven by a lifetime of hard work.

She wants a baby - but not a long-term partner. Her past relationships have ranged from the forgettable to the disastrous. She needs a man to make her pregnant and then disappear from her life. Enter Adam. He’s the last person she’d ever think of having a baby with. He’s immature, disorganized and allergic to hard work.

And even worse – he’s a musician. How unsuitable could one man be? However, in exchange for a sofa to sleep on, he agrees to help her find a suitable father for her child while unaware that he’s falling in love with her...

Affectionately known as the 'Ego-less Director', as we all know, Lesley is no stranger to great and varied drama. With a veritable stack of credits spanning from Casualty to Leila, Ghostwatch to Tracy Beaker, it comes as no surprise that this latest endeavour has already been met by a strong response.

I spoke with her to find out more about the project, and learn what she and Andy hope to achieve... 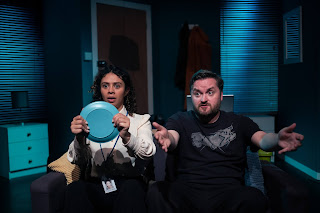 RICH: Your name is very much synonymous with TV & Film, so I'm curious how the process of directing for the stage differs - particularly given your past remarks concerning 'getting in the head' of the kind of producer that would be responsible for such a notional programme as Ghostwatch.

LESLEY: It's the same approach as I took with the Ghostwatch script, from inside-out. I did feel that Parky definitely gives that, "This isn't real - this is Light Entertainment". I spent a lot of time with that, as it was a programme which is a completely different animal to this, which isn't posing as something else. With Ghostwatch, there was a 'double-think' going on, but with Love Dance, it's a single 'think’. Ghostwatch was completely unique in that way for me, but for other productions, the thinking process is how to realise the script as one process. So, you're thinking about the heart of that script, and how to bring it across to one audience.

I had to think about Stephen’s work in an emotional sense, and on another level as a producer of Light Entertainment, so it was two approaches - the other element being Saturday Night live TV, in which something may or not happen. So, it's dressed as something completely different.

RICH: Is there any single aspect that has so strongly drawn you to the world of the stage, of late?

LESLEY: I haven't moved to theatre entirely, but the opportunity arose, and I love working with actors and realising scripts. Those two elements are common to both theatre & film.

RICH: The term, 'partners' has slightly different connotations in this instance. Fellow Ghostwatchers often enthusiastically refer to the lasting professional partnership between yourself and Stephen Volk. With yourself and Andy being partners in your own right, how has that working relationship differed from others in your career, if at all?

LESLEY: I do think that Andy is a very good writer. If you have great material, it's great to work with, and we're thrilled that Love Dance been extended due to popular demand.

RICH: I'm tempted to say, the small stage lends itself to big stories. The open air of the proscenium seems to laser-focus attention on details not always detectable behind the gloss of the big or small screen. In terms of preparation, critique, and revision, you've spoken previously regarding doing your utmost to make Ghostwatch even scarier prior to tx, and thus making necessary adjustments in the edit. How has that process differed, for this production? 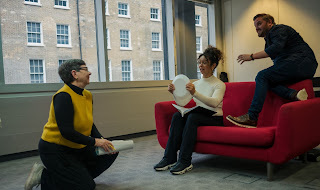 LESLEY: What I will say is that it's a massively different genre - romcom - for me. That's a really interesting question, because after the preview, we did refine it. We weren't getting into it quickly enough. We were really hard on ourselves. If it isn't working, cut it out. Once it's written down, you're slightly more reverential to the writer because of the theatre medium. We went into it, and made small but quite good adjustments. We were in total agreement over it.

It has been a fascinating journey from film to theatre. A learning curve in some aspects, but at the end of the day, it's working with actors and reaching out to an audience the best way possible. Both Andy and my skills are completely complimentary, we play to each other’s strengths.

I do like the work, any work, to be accessible. It shouldn't be necessarily easy, but accessible. Andy and I like stories not to be boring - boring an audience is the ultimate sin to be honest. Doesn't matter what genre or vehicle.

RICH: The making of Ghostwatch was undoubtedly an extraordinary feat of technical engineering. Did your experience in that world and era carry over here?

LESLEY: It is tempting to go, "Shall we zhuzh it up, and show off?" but you definitely can't with this. Front projection, fireworks, or whatever. It's a love story, and I think, all that stuff would hang-off rather awkwardly.

RICH: And to close, I have to ask if you have anything else in the pipeline...

LESLEY: Stephen and I are still planning the next film. I'm always happy to direct scripts I like, i.e. good stories. (But I would prefer COVID to be over, for all sorts of reasons.) Talks remain ongoing, and in our sights.

With huge thanks to Lesley for such a fascinating interview. If that wasn't enough to whet your appetite, here are some early reviews for what is sure to be a fantastic evening's entertainment if you're fortunate enough to pick up a ticket or twelve.

Until next time, Ghostwatchers... do try not to have sleepless nights.