That special time of year, which brings a chill to your skin
Has at long last arrived, twenty-twelve, ten months in
Particularly unsettling, if by fortune, you are
A fan of the show Ghostwatch, which left many a scar
On the trusting minds of millions, both youthful and old
And which, naturally, led to tall tales being told
Some true, some false, but most of them, thrilling

Like that man under the stairs, his face always grinning
From behind jagged scars, crimson cuts and deep wounds
Torn open by felines whom he obsessively groomed
Fastidiously, hypnotically, as if in a trance

Hold up, wait a tick! What was that I just glanced?
Swathed in a dark robe, buttoned up to the neck

Look what I've become - a near-nervous wreck
There's nothing there now, likely neither before
My mind just playing tricks, as I open the door
To my bedroom, oddly cold, with crisp frost on the floor

My ears pick up a snarl, a meow and a hiss
My hand starts to tremble, then tightens to a fist
I look to the window, eclipsed by red drapes
An impossible blackness from which light cannot escape

The light-bulb starts to flicker, the walls start to rap
The pipes start to knock, the ceiling starts to crack
He's here, I just know it, that presence I most fear
The man-woman figure who delights in visiting, each year

Staring me down strongly, it tries in vain just to speak
Vocal cords damaged
A stench of damp rotten cabbage
He's missing an eye, and half his neck, too
I try to run away but the floor's turned to glue
The Evil advances, heavy head slumped to one side
And reaches out towards me, no place I can hide
"Round and round the garden...", he/she groans with a rasp
And then without warning, before I can gasp

I awake in my bed, just seven years old
Tucked up under covers, more precious than gold
Look up at the clock, it's quarter to five
Couldn't care less, thank God I'm alive
What a horrible nightmare, a feverish dream
Which has taught me that sometimes, things are not what they seem
But if there's one thing I do know, and that much is certain
You can never quite tell, what might be lurking behind the curtains. 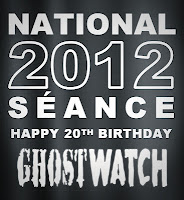 Greetings, Ghostwatchers! Fire up your Twitter engines and dust off those serial port keyboards, it's almost time for National Séance 2012!

Pretty straightforward as usual. We will be hosting a live Twittercast at precisely...

...at which time, we'd like to ask you to join us in playing your very own personal copies of Ghostwatch (whether on DVD, VHS, Laserdisc, Betamax, Printed Circuit, Symphonium, etc) and join the worldwide community of Ghostwatchers/Pipes-Phobes in celebrating the Twentieth (yes, 20th!) Anniversary of everyone's favourite Hallowe'en Hoax. You never know, between now and the end of the evening (at the latest), there may even be a small surprise in store...

As per usual, the hash-tag for the event will rather conveniently be #Ghostwatch. Do try to remember adding this to the end of every Tweet you send (something easy to forget - even for us!) and that should keep all the comments nice and easy to keep track of. After logging into Twitter, head on over to the following page...

...which should hopefully update and display all new Tweets as they come in. Keep your eyes peeled for the ever-bashful, Pipes the Poltergeist - if you see him, be sure to mention when and where, and add the #PipesWatch hash-tag alongside the #Ghostwatch tag.

As is tradition around these here parts, to fully complete the effect of a repeat viewing, you can also watch the BBC Continuity Announcement and Screen One Ident first:


...But depending on which version DVD of Ghostwatch you might be using, it may be necessary to start your copy slightly earlier.

If you're watching from the BFI DVD, you can start playing the video above at about 21:24:14 and then start Ghostwatch immediately after.

If you're watching from the newer 101 FILMS release, you can do the same as above, but only need to watch the Continuity Announcement. As soon as you see the blue-ish TV Screen that heralds the start of the classic Screen One ident, that's the moment to start playing your DVD.

Looking forward to seeing you there, as always! And remember, as you can well see below, There Is No Excuse Not To Join Us..! ;)