October 02, 2012
Another little gem here, sent in from Rear Admiral Lieutenant General Symes of G&T Towers. In fact, it's something of a revelation...

LITTLE KNOWN FACT: Craig Charles did not star in Ghostwatch. His role, was in fact, entirely portrayed by on-screen double, Lloyd Mullaney. And that's a hundred-percent true, that.

It seems that during last night's episode of Coronation Street (specifically, the 7.30pm episode on Monday 1st Oct), a handful of old photographs were presented as undeniable proof that lovable character, Lloyd is father to a long-lost daughter, or something. And wouldn't you know it, one snapshot clearly shows old Doormouse Cheeks at the house in Foxhill Drive (specifically, the Early Family's kitchen), grinning away into camera with his own inimitable brand of chirpy, gerbil-faced optimism.

Not only that, but this strangely-reminiscent image appears to bear a striking resemblance to the very same informative screen-grab headlining Craig's bio in the blog's Cast Section (minus the watermark, naturally).

Incredible coincidence, or just 'faces in the fire'? You decide... No, wait, I'll decide for you. It is the same picture. There you go. Seven-seconds of thinking-time saved. Now, feel free to savour in the blissful insanity of this staggeringly-quaint revelation - GHOSTWATCH WAS FEATURED IN CORRIE LAST NIGHT.

And if you'd like to see the scene for yourself, head on over to the ITV Player and skip ahead to the 15:30 mark for the start of the scene. 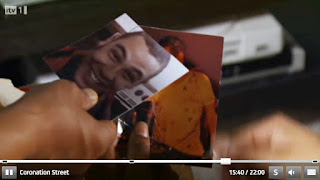