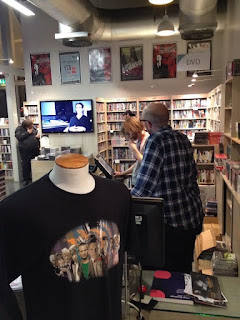 Our retrospective documentary, Ghostwatch: Behind the Curtains held its first screening at BAFTA Piccadilly in late 2012. It was released on DVD in 2013, and during that year the BFI became the first streaming service to include the film on its Mediatheque servers, amongst some 95,000 carefully selected titles.

Also around that time, the bookshop at BFI Southbank very kindly made available a number of DVD copies (now sold-out), which led to this somewhat meta snapshot, taken by Stephen Volk, of staff watching the doc before recognising him and eagerly confessing their proud #PipesPhobes status!

The British Film Institute has been a supporter of both this project and GHOSTWATCH since the early days; first spearheading a truly awesome DVD release in 2002 in time for the programme's Tenth Anniversary. Now, with great pride, we can officially announce that they have done it again, in being the first to bring the documentary – now 30 years in the making – to your digital displays care of BFI Player.

Yes, Ghostwatch: Behind the Curtains at long last returns on 27th October of this year, and subscribers to the service can add the film to their watchlists now. New subscribers can also enjoy a 14 day free trial (then £4.99/month or £49/year) with which to discover a dizzying range of classic and cult films, some featuring exclusive introductions by Mark Kermode (hey, if we ask kindly/repeatedly enough, I wonder if he might record one for us..?) 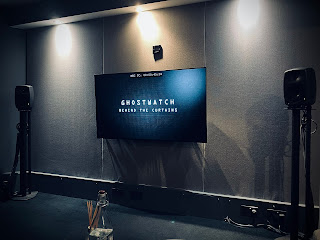 “I am so thrilled to see BFI are making this in-depth document on the making of GHOSTWATCH available for the 30th Anniversary!”

Bringing back the documentary has been in consideration since we sold out on DVD sometime around 2018. Being a self-funded Independent production, this has taken longer than expected, but for all good reasons.

Even more long-term friends to the production, the technically proficient team at CODA post-production studio in Soho, recently supervised and implemented a beautiful picture grade for the entire film, which means it shall reach you in glorious full HD, too. As always, I cannot say thank-you enough to well-wishers of the project for their support, for which I shall remain eternally grateful. #TeamEffort

We continue to be asked whether the doc shall be returning on physical media, too. The short answer is certainly not before the 31st October, and possibly not even before the end of the year. Virtually every aspect of such a release has been prepared, but the exact form this proposed reissue shall take remains in the offing. I wish I could say more but, as tends to be the way, another extremely exciting opportunity has recently presented itself... more on that later, though – not least as we shall be asking to hear your thoughts on just what you'll be seeing. Ooh.

Look forward to seeing you at Sheffield, BFI Southbank, and National Séance, shortly. Incidentally, very limited numbers of tickets are still available and, again, if you count yourself a fellow Foxhillian, you certainly won't want to miss these. I cannot stress that enough!