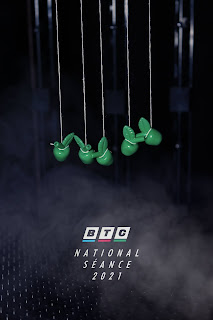 Since 2010, Ghostwatchers across the globe have been playing their copies of the 1992 BBC1 special drama on Hallowe'en Night, October 31st, to simulate the fabled repeat screening that, to date, has not yet come to pass. We call the event, National Séance, and you are very welcome to take part!

In order to do so, all you need is a copy of GHOSTWATCH on any available medium. Start that copy at precisely 21:25 just as the show originally aired, and then comment on the proceedings on Twitter. Don't forget to include the hashtags, #Ghostwatch and/or #NationalSeance followed by the year you happen to be taking part [for example, #NationalSeance2021] as this helps keep track of messages as they come in. Do please tweet @Ghostwatch with your points of view, potential Pipes Sightings, and spooky observations about just what you're seeing.

The following clips are also a handy way of making for an even more authentic evening...

Firstly, we have the original continuity announcement that preceded the programme on the night of transmission [kindly shared by Stephen Freestone]. As the inaugural BFI DVD release omits the Screen One ident [which featured a stop-motion boulder exploding through a television set before crawling to a halt], this clip was created in order for those wanting to experience as close to the original broadcast, as possible.

If you have the BFI DVD, start this clip at precisely 21:24 - however, if you're using the latest DVD release of GHOSTWATCH from 101 Films, then pause this clip as soon as the continuity announcement ends, and simultaneously hit play on your DVD - as the latest release reinstates the Screen One boulder ident, and you don't need to play it twice.

The next clips are available courtesy of the wonderful VHS Video Vault. Below is the advance trailer for GHOSTWATCH - a special shoot directed by Dr. Iain Macdonald, starring Sarah Greene.

The Outro Continuity Announcement, albeit truncated, is what immediately followed the broadcast [if you have access to a longer version of this, let us know, as we'd love to see it again!].

There was also a 'Reassurance' Continuity Announcement that followed later on, in the evening...

Above all, we hope you have fun on Hallowe'en Night. GHOSTWATCH remains a pretty scary experience for many of us, so don't be afraid to make your voices heard in celebration of this wonderful piece of British drama.

Just try not to have sleepless nights...