Showing posts from September, 2012
Show All

Is this happening live, I think it is..?

Host, Jimmy Carr Greetings, Ghostwatchers! So... last night, just as I was falling head over heels for the girl in the new Ikea advert (...ahem), this message came through from BtC supporter, @Snarglepip via Twitter: Ooo nice @Ghostwatch question on big fat 90s quiz there! ...And just like that, +1 channels suddenly make a whole lotta sense. About an hour later (on C4+1, naturally), presenter Jimmy Carr asked his three teams of celebrity panelists on The Big Fat Quiz of the 90s the following question... again. "Sarah Greene was 'killed' in a basement, and Michael Parkinson was 'possessed' by an angry ghost called 'Pipes' in which "legendary" TV show?" Okay, let's get the nitpicking right out of the way. Technically, Sarah 'disappeared' into The Gloryhole (not counting the revelation of her eventual fate in ' 31/10 '). Also, The Gloryhole itself isn't a basement, rather an under-stairs cupboard. Plus, within the
Post a Comment
Read more 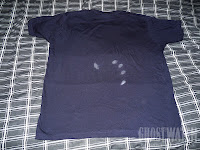 I'm not a sceptic. I'm not a believer. I'm open-minded. Sometimes, things can be explained. Sometimes, they cannot. Any true-life oddity that, despite all efforts, remains intangibly inexplicable suggests to me that the average human mind is either somehow incomplete or deeply flawed in its problem-solving capacity. Now, I'm cool with that (being unavoidably ignorant). It's not like everything needs explaining, anyway. To paraphrase our old pal, So'crates, "The only true wisdom comes from knowing you know nothing". But saying that... ...HOW DO YOU EXPLAIN THIS SUDDENLY APPEARING ON THE BACK OF MY SHIRT WHEN NO-ONE HAS TOUCHED MY BACK ALL DAY? Genuinely spooked by this one, dear readers. Even stranger is that the mystery mark staunchly refuses to come off. Unless someone recently dipped their fingertips in bleach and snuck up behind me with the silent grace of a ninja-trained xenomorph, I truly cannot see how this came to pass - not to mentio
Post a Comment
Read more 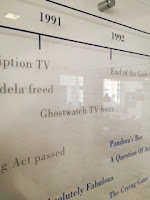