On Saturday, 31st October 2020, the annual Behind the Curtains Tweet-cast, National Séance will have been haunting, cheese'n pickling, and otherwise glory-holing your Twitter feeds for no less than a decade. How time flies, even when your watch stops.

We've all heard the same captivating anniversary speech a thousand times before, but when I first imagined the idea of a virtual 'repeat' of Ghostwatch in 2010 as potentially being a fun way to celebrate Hallowe'en, and the programme's eighteenth birthday, alongside some like-minded fans, I had no idea it would become a kind-of phenomenon in its own right.

Twenty-eight years on from 31/10/92, whatever single aspect that continues to make Ghostwatch a source of fascination remains elusive, even to me. My mission to learn more about the programme, and its reaction, now almost three decades following its first and only, in-full British airing shall now likely accompany me forevermore; as will my side-quest to boil-down some pure, observable form – the supposed magic element that sustained both the stark creative genius that engendered its rare production, and loyal following that... well, followed its legendary broadcast.

It also seems, I remain far from the only person out there, increasingly keen to one day see the Screen One special drama return to television, where it rightly belongs – not upscaled, not needlessly pan-and-scanned to modern-day widescreen – merely repeated at least once more, in proper, useful, dignified context. Whether this shall ever happen outside of the hopeful artifice of National Séance, remains to be seen. The Thirtieth Anniversary is, however, just round the corner...

The long-standing & delightfully-growing community of fellow Tunstallonians, Foxhillians, and Pipes Phobes who have taken it upon themselves to carry, share, and dissect the many myths, and facts, surrounding the show is truly an extraordinary one, at that. Generous, supportive, and committed in all the right ways, it is more than fair to say that this project, and its continued hub of research just wouldn't have been possible without you all, and I offer my sincere thanks once more.

For those yet to join us, the upcoming decadian evening itself is based around the altogether simple concept of synchronising our personal copies of Ghostwatch, and pressing 'Play' at exactly 21:25 – just as it aired, twenty-eight years ago. What usually follows, is a heady mix of debate, nostalgia, and good humour, as fans from across the globe come together to celebrate an unconventionally-unique drama, that truly changed Television as we knew it, forever.

I'll never forget, in 2012, when we sky-rocketed up the leader-boards, at one point even rising above coverage of the Liverpool-Swansea game, that night. Since then, regular Ghostwatchers have joined us like clockwork. Every year, potential Pipes Sightings have continued to be poured over, themed cup cakes have continued to be baked, and Kevin Tripp's aforementioned, lynchpinian, Cheese'n Pickle sandwich has increasingly, and rightly, become stuff of legend.

Invariably, each year, we try to do something special to mark the occasion. Much earlier in 2020, plans were afoot to bring National Séance to the masses – care of a special live event. Then, for much of the world, normal changed overnight.

But where there's a will, there's occasionally a way! So, this time, for one night only, mostly-successful film-maker, Rich Lawden [... me] shall be doing his best to host a live video stream on Hallowe'en Night appropriately entitled, National Séance Live.

Joining Rich [... that's, still me] for this rare and special reunion, will be the show's creators, producer Ruth Baumgarten, director Lesley Manning, and writer Stephen Volk. A link to the live stream shall be added here on the blog, and bandwidth-permitting, shall commence around a half-hour earlier than usual, at 21:00, for an advance introduction. As always, questions, concerns, and comments can be sent to @Ghostwatch – and if you can, please try to use the hash-tags, #NationalSeance or #NationalSeanceLive to help us keep track of messages, as they come in.

Remember, throughout the sure-to-be spine-tingling evening [hums, The Twilight Zone theme], you can share with us your own Supernatural experiences on our very own, Hallowe'en Witchboard... I mean, 'Switchboard...' I mean, 'Twitter'. We particularly want to hear from you if you've had any personal experiences with the show – particularly, stories, photos, creations – and crucially, your opinions on just what you're seeing.

And stay-tuned during this month's run-up to the event, as one or two special, upcoming articles may just materialise around these here parts, too. Look forward, as always to seeing you there! 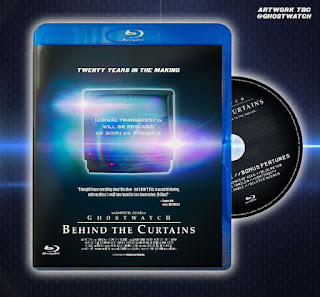 A further burning question that continues to warm the cockles of the BtC inbox concerns whether or not the doc shall finally be returning to DVD or Blu-Ray. The as-yet staid answer, remains a very definite, 'possibly'.

News on this, if, as, and when it comes in, as always. It may seem relatively easy, getting a film out, in this day and age, but there's also much to consider ahead of time, in getting it done right. But hopefully, with all things being equal, the minutiae surrounding a proposed physical re-release will again be looked into next year, at the very least. I can't promise anything concrete right now, but I'll try my best to make it happen.

You know... [of course, you do], this little Indie project continues to remain such an immense source of pride, to me. It has encapsulated over a third of my adult life, and above all, it really does feel like we've achieved something, thus far. In 2012, the documentary was completed in time for the 20th Anniversary. In 2013, it was released on DVD to strong reviews, and an overall positive response. As a great man once said, I couldn't have been happier with it, in its own terms.

Believe me, I want my film back in the world, too. If I could, I'd love to make another. As a piece of work, the doc means a great deal to me, as I'm sure it still does to many of those friends, family, and colleagues, who worked so hard to make it happen. It deserves a decent encore, at least.

That's invariably what makes the occasional screening so worthwhile. Plus, with the dreadful pandemic continuing to dictate terms on all of our lives, options in making the doc available again remain sorely limited. In any event, I don't quite have the same energy, or even impetus, that I used to in peering bright-eyed through the increasingly-opaque glass of triple-latched Acquisitions Department double-doors. Of late, Life has continually reaffirmed its premise of being precious – with a great many other aspects increasingly too important to coolly sidetrack.

That said, the doc shall return. Mark my words.

Happy Hallowe'en, Ghostwatchers. Try not to have sleepless nights, thank-you for following and supporting the project for so long, apologies again for the delays, may your roaring determination be ever-bolstered in these trying times, and as those with greatness in their hearts have so often proffered in similar times of desperation and need, "Don't let the bastards grind you down."

Oh, and here's Stephen "Foxhill Supremo" Freestone's copy of the opening BBC Continuity Announcement for use on the night. For added authenticity/effect, simply play approximately one minute before we start [21:24]. Speaking of a 2-Disc Special Edition, if we ever get a hand in making that happen, I would especially like to see this reinstated, as I've always felt, it really helps to set the scene, for what follows...