The new REVOX A77 MK lll is the best recorder that REVOX has ever made. A unique synthesis of reliable electronics and precision mechanics. It sets a new standard in tape recorder design and performance. While fully capable of meeting the most rigorous studio demands, its ease of operation also makes it the perfect choice for the serious enthusiast.

If you've seen Ghostwatch, then the chances are you'll still be able to vividly recall the chilling voice recording scene in which the shredded voice of Pipes the ghost could first be heard. But something you might not be aware of is that the specific model reel-to-reel player used in the film is now a highly sought-after collector's item: the ReVox A77 Mk III. 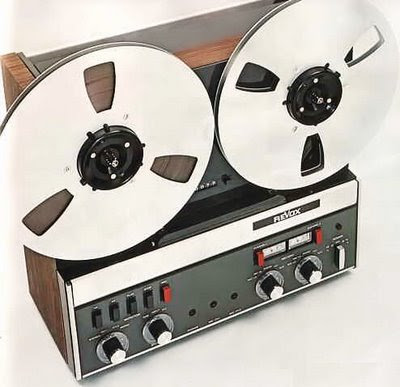 Of Swiss design and construction, the A77 was at the higher end of the audio recording/playback range before the advent of digital sound, and is still held in high regard by audio engineers and enthusiasts alike.

As stated in the audio commentary for Ghostwatch, one of the reasons it was so prominently featured was due to to the fact, the very same method of involving one's imagination through lack of any visual interest was being used in other true-life crime documentaries at the time.

For more information on this and other model ReVox players, click here. And for a more comprehensive look at reel-to-reel technology, check out this informative Wiki.