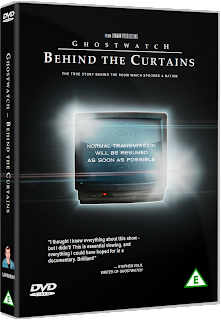 Yes, over the past few months, molten picture and sound has been continually poured into cast-iron disc stampers, before being lovingly encased into hermetically-sealed pockets of retrospective goodness. You know what that means...

Ghostwatch: Behind the Curtains is finally here.

So, how/what/who/where/when can you pick up a copy? Simply head on over to LawmanProductions.co.uk to find out more info. In terms of content, the disc contains the teaser trailer and the full 90-minute main feature, itself.

All major news/updates regarding release will be logged on the @Ghostwatch Twitter account, as usual. Interestingly, it seems that no-one caught the sneak peek of the cover published back in 2012... even with a sneaky clue in the article title, no less(!) Also this year, more PipesCasts may be coming! Yes, the long-gestating Ghostwatch radio show will hopefully be launching sometime over the next few months. Episodes are set to feature interviews with key contributors to the doc, and maybe even one or two interviews that didn't make the final cut...

In the meantime, we thought you might like to check out this talk from Stephen Volk for TEDx Bradford on Avon, recorded in 2012 entitled, "The Ghost That Spooked a Nation", in which Stephen recounts his experiences working on the show and beyond. More soon!