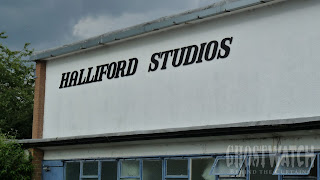 It is the morning of Friday 5th August 2016, and a fairly pleasant 23°C (outside of the car). I'm currently on my way to a small Independent film studios, Halliford, just a few minutes away from m'old haunt, Shepperton Studios, to catch up with some friends, and take a long-awaited trip into the great beyond.

Parking just by the main doors, by now, I know that inside one of the longstanding building's two cosy sound-stages is a dedicated production crew, currently shooting proof of concept footage for a new film project known as, Extrasensory, written by Stephen Volk. By now, you might have guessed why I was invited along. 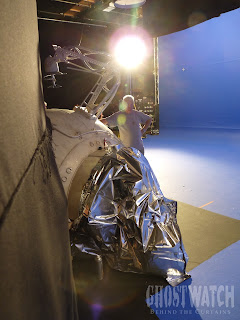 Upon entering the stage, I next find myself enclosed in a sky-less blue bubble peppered with tracking markers. Near the centre of the space is a grey-white capsule emblazoned with Soviet-era inscriptions, and boasting a thin latticework of lightweight antennae, reaching towards the light like a weary, galvanised sapling. I notice, the pod's ostensibly metallic surface looks scuffed and scratched at seemingly vital points. Though, precisely how these abrasions occurred, remains to be seen.

Artificial starlight beams down, casting harsh, unnatural boundaries of deep shadow and glaring brightness. Amongst the crowd, I find Alex Ashcroft, our principal sound recordist from Behind the Curtains. Then, somewhere towards the nucleus of this intense haze, I recognise another familiar face, but so engaged is she in the proceedings, that I can't imagine she'll have time to say, 'Hello', anytime soon. A moment later, she turns and says, 'Hello', anyway. 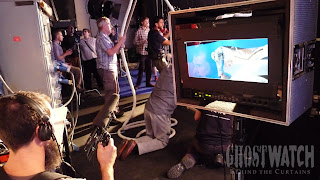 The person in question, is director Lesley Manning, and this is her shoot. Introducing me to producer, Debbie Gray, I procure my bridge SLR from its carrier, and set about finding some good shots. Fortunately, I seem to have arrived just in time to witness things go very wrong for this spacecraft, and its as yet unseen occupant...

Behind me, a giant white panel boldly displays a number of mostly monochromatic storyboards, tracking the day's progress. Already, many of the static images have been scratched off with hastily-scrawled cross-marks. Scanning from left to right, I see that next on the itinerary is a close-up shot of a vital air hose straining to its limits, that proceeds to garner a few different takes. 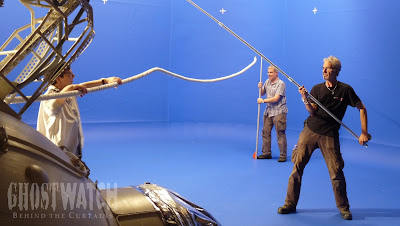 Then, a pair of technicians armed with extendable fishing-type rods practically manipulate the errant hose as if tumbling incoherently through space.

The shots themselves are clearly intended to be just seconds long, if that, but even so, each requires considerable time and planning to execute as intended. The attention to detail is cross-checked from viewfinder to video assist monitor, with not much at all being left to chance. 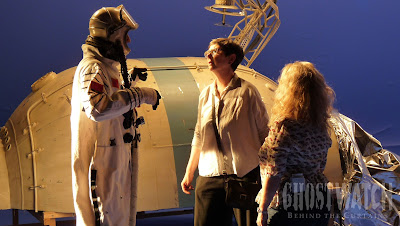 At last, our Cosmonaut for the day arrives from the care of the Make-Up and Wardrobe departments, fully kitted out, with visor open for added ventilation under the scorch of the studio lights, and plenty of isotonic-type refreshments on standby.

Promptly hooked up to a supportive pulley system resembling a giant coat hanger, the crew strongly hoists him aloft, about five feet from the ground, and thanks to some creatively-choreographed jostling, for all intents and purposes, he now appears weightless, thrashing about in all three-axes, in a desperate attempt to keep from spinning out into the implied void. 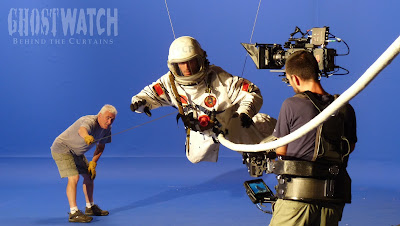 Before I can learn of the character's thrilling fate, a much-needed break is called, and the hangar doors grind open to a deservedly tiring sun. Checking my watch, I realise that several hours have now passed. Refreshing my camera's memory capacity, I also see that I am now down to my last few shots, so sensing an opportunity to make a quiet exit, I discretely pack up my things, when Lesley approaches to enquire as to my day on set, before wishing me a safe journey home.

Seven months later, and you can imagine my anticipation at recently finding this drop in my Inbox...

Following their legendary partnership working behind the scenes on Screen One's Ghostwatch, Lesley and Stephen last combined talents during the making of the BBC anthology series, Ghosts (1995). Rather excitingly, Extrasensory marks their first collaboration in over two decades.

I spoke with Stephen regarding how this new project came about, and his hopes and expectations for the production, and beyond... 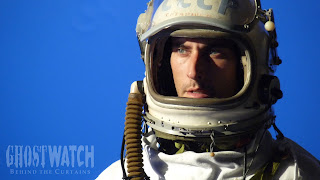 VOLK: Extrasensory is about twin brothers in Russia – one a simple farmer and one who leaves home to become a pilot, then a cosmonaut. After years apart they are brought together, forced unwillingly to be part of a secret experiment to test ESP in space. It’s a kind of fable or folk tale, in a sense, told through the prism of science fiction.

Way back, I read a fascinating book called Psychic Discoveries Behind the Iron Curtain. This was during the Soviet era, and there was a pile of evidence the Russians were looking at stuff like auras, people who could move objects with their minds,and experimenting with ESP. One experiment over a large distance involved a submarine, and they found the ESP didn’t have a delay like radio waves.

So I couldn’t help but think: What if you extended that into the great distances involved in space travel? And I immediately pictured like a Ray Bradbury, homespun apple pie type story rather than hard SF. Then I thought for once, please God, let’s not have it gung-ho American astronauts but Russian cosmonauts with all that idealism and slight mysticism that goes with it.

Yourself and Lesley last worked together on BBC's Ghosts (1995). What was it about this project that compelled you both to recombine and collaborate, again? 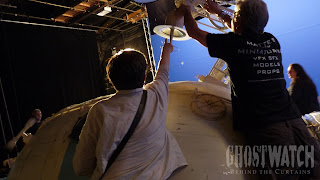 VOLK: What happened was I was frustrated that the script had been with one company a long time had come back to me in turnaround. I’d been badly burned and the script had got badly kicked out of shape by too many rewrites, so I took it upon myself to take it back to my original concept. Lesley read it and fell in love with it.

This was in the era of “space tourism” where we were first seeing camcorder footage from the ISS, and I think she found that a very interesting aesthetic. I was very comfortable with her taking the helm as I think we’d developed a bit of our own “ESP” over the years and both knew what we wanted. I also know from Ghostwatch that she has no ego and just wants to serve the material in the best way possible.

Does Extrasensory mark your first giant leap into the world of Science Fiction, or the subject of space exploration? How would you describe the tone of the script, and during the process of its development, did you ever feel that you were exploring creative aspects that as a writer, you had not yet considered before? 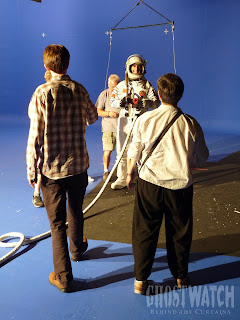 VOLK: Well, I’ve written a science fiction TV pilot that, alas, wasn’t made, but I grew up in the sixties on the science fiction of ideas, I guess, more than space opera and action. I like SF that is born of a situation, and the SF element amplifies it that bit further. You could say the theme of Extrasensory is communication: The brothers don’t get on, but the experiment forces them to relate to each other, whether they want to or not! Tonally it’s as much in the genre of psychic-ability dramas like Stephen King’s Firestarter or The Fury or Cronenberg’s Scanners. It’s not futuristic. It’s set in reality.

The joy with developing this story was that immediately it’s Russian you dispose of a million Hollywood films in your mindset and you are more in the realm of Tarkovsky rather than Matt Damon. That frees you to create a new mythology that feels different and unknown.

Finally, what do you most hope that audiences shall take away from the experience of the completed picture?

VOLK: The film is about both the vast scale of space but also the intimate and universal moments between all human beings, from whatever culture or country. The great director Georges Franju said: “What pleases is that which is terrifying, gentle and poetic.” And I think poetic ideas and images cross divides and open minds. That’s what you always hope for. 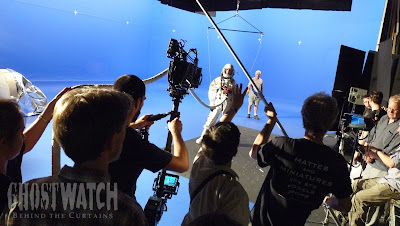 With thanks to Stephen Volk & Lesley Manning for the above, and Debbie Gray & Sam Cornish from Genesius Pictures. For the latest news on the development of Extrasensory, you can follow @GenesiusPicture and check out facebook.com/genesiuspictures to find out more.

Until next time, Ghostwatchers... Try not to have sleepless nights.