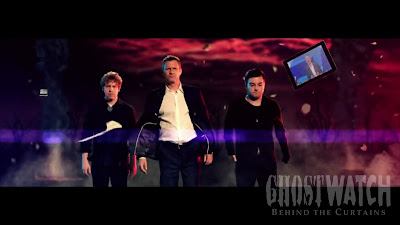 Given the nature of most topical satire magazine shows, you'd be forgiven for assuming the following week's instalment might - just might - feature a fairly insignificant follow-up to that altogether encouraging recommendation.

Well, who'd have thought the ectoplasm would well-and-truly hit the fan?

As close as we can legally get to a laugh down the pub these days, for those not in the know, The Last Leg, now in its much-deserved twentieth series, is a late night, weekly cultural review hosted by comedians, Adam Hills, Alex Brooker, and Josh Widdicombe; and last Friday's episode featured less of a hint, and more of a party political broadcast (© Rik Mayall, 1995) of everyone's favourite Hallowe'en Hoax, which in turn garnered quite the number of noteworthy, enjoyable mentions elsewhere and beyond. Which was nice. (© Mark Williams, 1994) 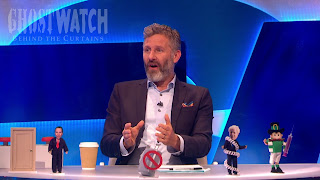 It all began around three minutes into the show, where Hills, beaming with the kind of elated reverence that so often follows from being introduced to the programme, explained:

HILLS: So, the Return Leg was, I had to watch Ghostwatch. Now, I didn't know what this was. It was broadcast on Hallow'een in 1992. It was hosted by Michael Parkinson. It looked like a documentary about a haunted house.

BROOKER: Mate. Honestly, it scared me so much when I was a kid. I still, like, I haven't been able to watch it as an adult because it scared me... 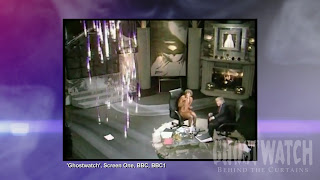 BROOKER: Genuinely, I much prefer the sequel, Springwatch.

HILLS: I watched it, sitting up in bed before going to bed. I thought it was brilliant. So well made. There were little things that happened throughout the show that made you think this was real. I genuinely had goosebumps watching it.

WIDDICOMBE: Genuinely, it terrifies me. Like, I rewatched it a couple of months ago, because I remembered it, and I watched it. It was so scary. Some bits are dated; for instance, the cellar in which Pipes the ghost hides is referred to throughout as, 'The Glory Hole'. But apart from that, it's a work of art, it's amazing, it's terrifying. It's so well considered. My friend went to watch the 25th Anniversary at the BFI. And, they screened it, and there were loads of people there, it was amazing. And, then afterwards, there was a Q&A with the director, Michael Parkinson and people, and they said, "Have you got any questions?" and the first person put their hand up, and said, "... Did you not know what a Glory Hole was?" 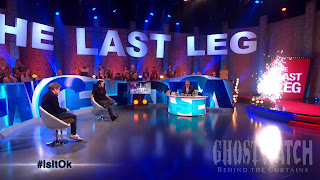 Following a brief, shudder-inducing compilation of scenes from the film's climax, Hills half-heartedly attempts a 'séance' during which his coffee cup seemingly moves of its own accord [in actual fact, by way of a magnet]. Good joke. Everybody laugh. Roll on snare drum. Curtains. [© Alan Moore, 1986]

Then, just a few moments later, in an unprecedentedly obvious gag, presumably set-up by wily studio staff, a nearby lighting rig 'exploded' mid-line read from Hills, in a spectacular shower of sparks worthy of any Starfleet™-brand circuit breaker. This seemed to genuinely unnerve the panel, which, too, was a joy to behold. 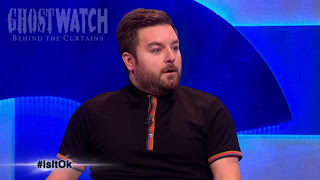 WIDDICOMBE: "Is that real?!"

WIDDICOMBE: [...] Are you trying to take the piss out of us?

HILLS: I think, no I mean, the piss has come out of something but... Okay, that séance may have worked a bit too well..!

WIDDICOMBE: People at home that think that was a joke, but what I'm going to tell you now, is none of us are good-enough actors.

HILLS: I don't know how to get back on with the show, to be perfectly honest, after that. 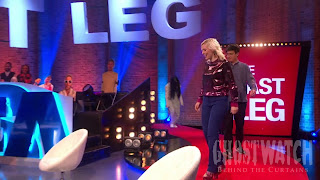 BROOKER: Are you lot having me on, there?

WIDDICOMBE: [...] No, I swear on my life, and that's a dangerous thing to do in a possessed studio. Can we get on with the show, 'cause I think, I'd feel more relaxed talking about COVID?

But that's not all as, at around the eighteen-minute mark, just as guests, Sara Pascoe [entirely and undeniably booked due to her fictional namesake] and Phil Wang were introduced, who do we see walking behind them, completely unnoticed of course, but The Ring's perpetually displeased, Sadako, shuffling spookily as ever, evoking a carefully-timed Pipes Sighting, of sorts. 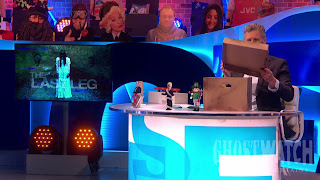 Then, at around the 29-minute mark, Sadako is seen yet again, this time in what appears to be analogue white noise on the set-mounted TV set as Hills 'blows dust' off the lost viewers' letters box.

Around 41-minutes in, a cardboard cut-out of Josh suddenly drops behind him, causing both he and Alex to, well, react in sheer, pant-wetting terror - to which Josh shakily replies, "Oh, I'm not playing this shitty game..."

Lastly, with moments to go before the show draws to a close, the studio lights suddenly cut-out, causing Hills to wander reminiscently about the darkened set before discovering a working autocue bearing the fateful line, "Round and round the garden, like a teddy bear. Fe-fi-fo-thumb." to which he recites with aplomb, in suitably dulcet, albeit modulated tones, and to a genuine round of applause. 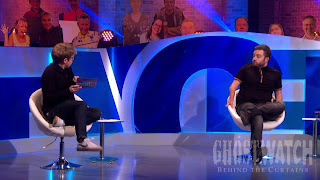 In addition to being a welcome lark, what is absolutely most encouraging about Friday evening's frivolities is just how positively Ghostwatch was referenced, throughout.

To be fair, despite being a considerable fan, to say the least, I'm rarely the sort to argue the toss over anybody else's conflicting viewpoint. We're all entitled to our opinions. If you happen to find the drama not to your particular taste, that's [well, sort-of] fine; particularly if you can convince me of your train of thought. In fact, the most critical voice of the evening, Widdicombe, merely posited how the show had 'dated'; least of all in its repeated utterance of the term, "Glory Hole". The rest was good vibes all the way.

Another point worth making centres around one of Josh's later lines, used for the title of this article; in and of itself a viewpoint shared by many fans; in that despite us being fully aware of the fictitious and/or dramatic nature of Ghostwatch, we nonetheless still find aspects, such as Pipes, as terrifying as any unsubstantiated urban legend, now decades on. With tiring overblown criticism too often being the easiest path to comedic effect these days, there was every chance this could have gone the way of any number of blissfully oft-repeated, Telly's Weirdly Nostalgic Awful Moments Part IX type-efforts, but here, the presenters and production as a whole thankfully took the opportunity to celebrate what they felt worked best about the show. As a result, it was a real pleasure to share in their own enjoyment, even for just a few brief moments. As far as my own critical voice is concerned, had Pipes himself made an appearance (or we are later able to find one, until now missed), I imagine the response would have been even greater.

Speaking of which, following all that, promptly came a slew of fascinating Tweets on Facebook, etc. from Ghostwatchers, both established and otherwise, regaling their feeds with cautionary tales of watching you-know-what go out 'live' on Hallowe'en Night, 1992. Statistics suggest #Ghostwatch trended at thirty-third place on the night. Not bad going for January, I'm sure you'll agree. Kudos!

In other news, I'm currently busy tapping away at a recognisably unfamiliar keyboard, having now imported half a terabyte of decade-old .mov files in mind for a certain mooted re-release... One slight problem being, that the main project file was edited using an earlier version of Final Cut Pro, and who'd have thunk - it seems that one of the most profitable technology companies in human history hasn't yet taken the time to ensure seamless and efficient migration between updated versions of their own software. Harumph, harumph.

Thankfully, the feelers have been put out to friends of the project, who are currently doing their utmost to help resolve the issue. If however, this remains unworkable, one potential outcome could mean that everything may need to be recompiled from scratch, which to me, is even scarier a prospect than the sight of an out-of-shot, venerable broadcaster deeply reciting a nursery rhyme. As always, more on this as and when it comes in. (© BBC News, 1969)