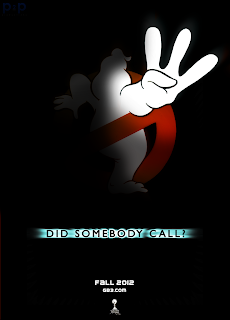 We very rarely report on non-Ghostwatch matters around these here parts, but this particular news bite seemed just too good to pass up. Plus, it's got the word 'Ghost' in it. So there.

Living legend, Dan Aykroyd has been flying the flag for a third Ghostbusters movie now for so long, it appears that time has finally taken its toll on his beloved band of paranormal investigators and eliminators. It goes without saying, the original flick is an undoubted classic which managed to spawn a kooky sequel and remarkably impressive, first wave animated series, The Real Ghostbusters, but even the finest trilogies rarely end on the best movie...

The veritable Twinkie of a spoiler that Mr. Aykroyd recently revealed on the Dennis Miller Radio Show was such a wonderfully melancholic piece of character description for the aging Dr. Ray Stantz that my hopes (or should I say, 'spirits'?) are once more beginning to rise in anticipation of the 'upcoming' GB III. If you're a fan of the series, and don't mind being very slightly spoiled, do check out the sample clip on the above link.


Here's hoping the entire team will return this one last time to slug it out with some pesky poltergeists before staying on to dance the night away with some of the lovely ladies who witnessed the disturbance. This is Casey Kasem, now on with the countdown!