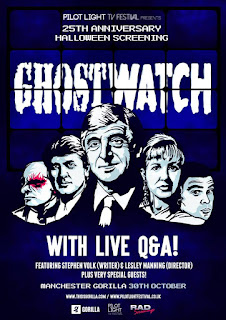 As we all know, this year marks #Ghostwatch25 - the Twenty-fifth Anniversary of yours, mine, and everyone's favourite Hallowe'en Hoax, and to get this scanner truck on the road, we're delighted to finally be able to announce a pair of upcoming, very special screenings of the film set to take place on the 30th and 31st October 2017 organised by Pilot Light Festival.

Not only that, but both events are set to feature Q&A sessions featuring members from the cast and crew, including, Gillian Bevan (Genesis, London), Lesley Manning, Stephen Volk, and Behind the Curtains writer-director, Rich Lawden.

The first event shall be held at Manchester's Gorilla Cinema on October 30th. The second event, hosted by London's Genesis Cinema on the 31st, shall not only mark the programme's aforementioned Silver Jubilee, but with that screening set to kick off at precisely 21:25 on Hallowe'en Night, also provides a rather exciting and unique opportunity to celebrate National Sèance this year...

More on #GW25 as and when it comes in! And until next time... try not to have sleepless nights. 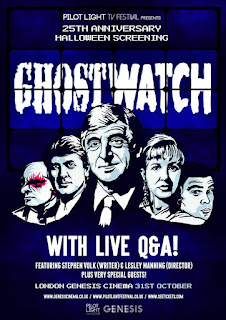 More from the official Press Release...

Presented as a live paranormal investigation with real BBC personalities of the time including Sir Michael Parkinson, Craig Charles, and Sarah Greene, plus phone-ins from ‘viewers’, the scripted show’s apparent authenticity resulted in an estimated 30,000 calls to the BBC, with viewers believing the on-screen paranormal investigation of a house plagued by a benevolent spirit called ‘Pipes’ was in fact real. The ‘mockumentary’ caused panicked phone calls from BBC viewers believing the on-screen events to be really happening and subsequent claims of post traumatic stress disorder to have been induced in some viewers. Never again aired on British television, the show has found cult status on internet forums and an international fan base following its DVD and recent VOD release via the Shudder horror platform earlier this year.

Ghostwatch has since gained acclaim as one of the most groundbreaking TV events of all time, preceding constructed reality TV series such as Most Haunted by almost a decade and screening seven years before the conception of the ‘found footage’ and mockumentary horror film genre kick-started by the success of 1999’s The Blair Witch Project, followed by the Paranormal Activity series.

Presented by Manchester-based Pilot Light TV Festival, the two screenings will take place at Gorilla, Manchester on Monday 30th October and Genesis Cinema, London on Tuesday 31st October. The events will be attended by director Lesley Manning, screenwriter Stephen Volk, and director of “Ghostwatch: Behind the Curtains” Rich Lawden. Gillian Bevan, Dr. Lin Pascoe in Ghostwatch, will attend the London event: a familiar face on UK TV screens from her role as headteacher Claire in Teachers and recently portraying Prime Minister Theresa May in Channel 4’s The Windsors.

Director Lesley Manning and screenwriter Stephen Volk said: “There hasn’t been a better time to remember Ghostwatch. We are in the age of ‘alternative facts’ and ‘fake news’, which Ghostwatch was all about. Who do you trust? What information is true? Who do you believe?  Do you believe your eyes? We didn’t intend to be, but perhaps we were the pioneers of fake news…”