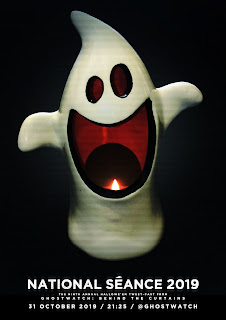 But first things, first. Will the doc be made available in time to mark the slightly sooner of those upcoming two events? Regrettably, most likely, not. A re-release is still something we're looking into, but so far, the stars have yet to realign since selling-out on DVD, now a fair while back [insert legitimately-plausible, though encouragingly-vague excuse here]. It will happen eventually, though; and with some luck, not too far down the road. x

Nevertheless, as I hope you may have guessed by now, there shall be a brand-new BtC article unveiled just in time for Hallowe'en Night, so be sure to keep an eye out for updates!

Also on the 31st, writer/creator, Stephen Volk, and director, Lesley Manning shall be making a special appearance at MAC in Birmingham, for a rare screening of the original film, complete with Q&A; organised by none other than doc interviewee, David Baldwin. Every screening I have attended featuring Lesley & Steve has been fantastic, so if you happen to be in the Midlands, and are on the lookout for a no-doubt fascinating talk to mark the spookiest night of the year, you now know exactly where to head! Tickets are available from the Midland Arts Centre, and the event kicks off at 8:30pm, with the Q&A to follow.

Then, on the 2nd of November, doco director, Rich Lawden shall also be making an appearance at the Sci Fi Weekender event, Great Yarmouth, where a special, equally-rare screening of Ghostwatch: Behind the Curtains shall be taking place, too! The Q&A is currently expected to take place sometime in the early afternoon, with the screening to follow. You can find out more info, by clicking here.

And, just a quick reminder for our annual National Séance Tweet-cast, on the 31st, for anybody who hasn't taken part before, all you have to do to join in is grab a hold of your personal copy of Ghostwatch, and get ready to press 'Play' at 21:25 precisely. This helps to ensure that everybody is able to follow the ensuing Twitter-based deliberations/ramblings, at roughly the same rate.

Simply put, the event both celebrates the special drama's first and to-date only British TV broadcast, and allows an opportunity to collectively head-scratch the lack of any UK-based repeat screening, since 1992; particularly, in light of the great deal of fascinating and worthwhile discussion that Ghostwatch has generated, despite its, to date, rarely-relinquished relegation to the Archives.

During the Tweet-cast, if you happen to notice anything of interest, be sure to mention it! We're still on the hunt for as many as four additional, as-yet undiscovered Pipes Sightings. The hash-tag #PipesWatch can be used to submit your potentially crucial discoveries to the community, for in-depth evaluation...

That's pretty much it. I know I say this every year, but the National Séance event and all it has achieved never ceases to amaze. As always, I look forward to seeing you all there, and do please share your reports if attending the MAC event, which sounds like a lot of fun.