These things we're talking about are very, very rare, indeed... 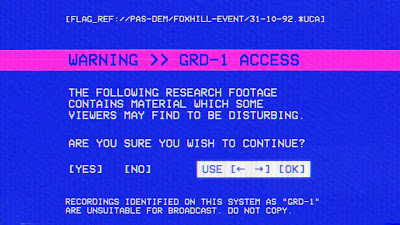 Ever so imperceptibly infinitesimally belated news, but I am happy to report that, once again, this year's annual National Séance went tremendously well. Thanks so much to everybody for joining in on Hallowe'en Night and making the event so special. I gather, #NationalSeance2022 was trending at #13 on the Most Tweeted in 24hrs leader-board. Not bad going!

This year, I tried out the Twitter Space option, which, when deluged with lots of messages coming through all at once, proved a bit tricky to operate single-handed, but thankfully, it all seemed to coalesce on the night. Such fun!

Huge thanks must go to our regular commentators (is it too mushy to say, 'Family?'), even those who couldn't attend, and especially those who kindly took the trouble to let me know ahead of time. Late Monday evening can be a tricky slot to partake in some ghost-watching, to be sure... But fear ye not, Hallowe'en Night next falls on a Saturday as soon as 2026AD, so get those calendar notifications primed and ready to fire-up in just under four years' time, right after, soon-to-be daily reminders, 'Put personal hovercraft back on charge', 'Sit down for delicious three-course meal in pill form', and last but by no means least, 'Quiet three-seashells time'.

If you had the fortune of tuning-in to our live Twitter Space, you might recall there was a tiny little announcement made partway through...

And that announcement concerns GHOSTWATCH being released on Blu-ray in Australia, next year!

Despite the fact this release (set to be the programme's seventh standalone outing, for those counting) shall only be available to purchase in the territories of Australia & New Zealand, the UK of course shares the same region code (B), so if you're reading this in Blighty, and expect to pay a visit Down Under for a sunny holiday in 2023, be sure to pack your trusty Blu-ray player(!)

So, what is expected to feature on this upcoming disc? One of the chief aims of Behind the Curtains since its inception was to one day bring both the documentary and main feature together in a complimenting package. As a whole, this project has been in development since at least 2008, and it means such a great deal to see the finish line in sight, at last. Subject to change, the following is now very much in process, with a number of elements virtually ready to go:

Regrettably, despite our very best efforts, it is currently not possible to include the much-requested Points of View, BiteBack, and 12 Again: Spooky Special segments.

Suffice it to say, it has been my dream, goal, and mission to make this happen for over fifteen years now, and I couldn't have got this far without your generosity and support. There's still a fair bit of box-ticking to do before carrier pigeoning the master files over to the disc replicators, but we shall keep you informed as to any further news. Fortunately, development for a great deal of the supplementary material commenced from 2008-onwards, in mind to accompany the fabled 2-disc DVD release which never materialised.

The basic story behind this upcoming disc stretches back to the days of the documentary, when we first reached out to the then-rights owners in mind to package the two together. After 101 Films ultimately picked up the UK/North America distribution rights for DVD, fresh discussions resumed, which lasted as far as the recent 'special edition' Blu-ray. However, after much soul-searching, it felt most appropriate for the two releases to remain separate (paranormal) entities. To me, the 101 Blu-ray release has always felt very much their rodeo, at least as much as Behind the Curtains does mine. I hope that explains things.

Another interesting aspect concerns the nature of authoring the discs themselves. It seems as though, despite boasting a far greater storage capacity than DVD, Blu-rays prefer to support a single resolution, frame rate, and refresh rate for all content. As GHOSTWATCH is a 50i presentation, that means all other content may need to be at the same settings. I take it, there are no objections? This is being made for fellow Ghostwatchers, after all. Please share your thoughts on this, as we would be very grateful to hear your individual takes. I have been reliably informed an alternative is to increase to 50fps and go progressive scan, but to be honest, that sounds like a bit lot of a ball ache.

It is incredibly important to me that GHOSTWATCH, being the main feature, takes precedence in this release, and remains as close to the original broadcast as possible. This is not only the mantra for the set, but also designed to aid future National Séance events, as the added continuity will already be lined-up and ready to go! However, it shall mean that, despite being shot and mastered in 1080p, the documentary could have to be interlaced. The main feature shall, of course, remain as close to its original picture and sound mix, as possible.

I, for one, cannot wait for the tentatively-titled GHOSTWATCH: 'On The Night' Edition to reach Australian shores. I certainly hope you enjoy it when it does. Estimated release is 2023.

Boy, what a year. Speaking of which, Daddy loves you, mate.